After you cross the river you’ll see a fenced in area with a bunch of crates. On the ground is the Knife of Counter-Striking. The knife constantly gives you haste and it stacks with the Haste spell so you’ll run even faster than normal. It’s pretty funny because in CS you run faster when you’re holding your knife. 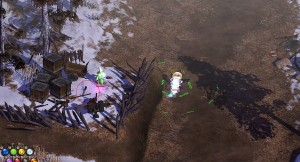 Keep heading North and you’ll get to the Orc Base. This section is a pain in the butt. Basically you’ll have to walk around and trigger a set of switches to activate a bridge. It sucks when you fall into the trench because you have to go all the way around to get back to the top section again.

Near one of the switches is the Tesla Staff. It has a passive special ability of increasing your lightning range by about 50% and an active ability lightning bolt. 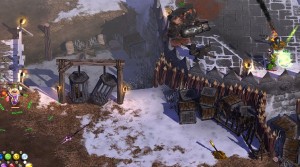 After you beat all the bad guys, you’ll talk to the King and everyone enters the Keep to fight Khan. The King will talk to Khan and you’ll see a funny reference to the Star Trek II: Wrath of Khan movie. The King and his men will depart for Havindr leaving you to fight Khan alone. 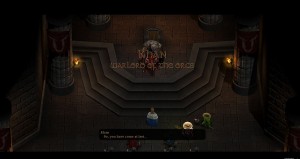 The easiest way to defeat him is by getting him wet with a spell and then freezing him. Then finish him off with a Super Steam Lightning Beam (QFASAS or something along those lines).

Defeting Khan marks the end of Chapter 5 (Havindr Strikes Back).

This site uses Akismet to reduce spam. Learn how your comment data is processed.